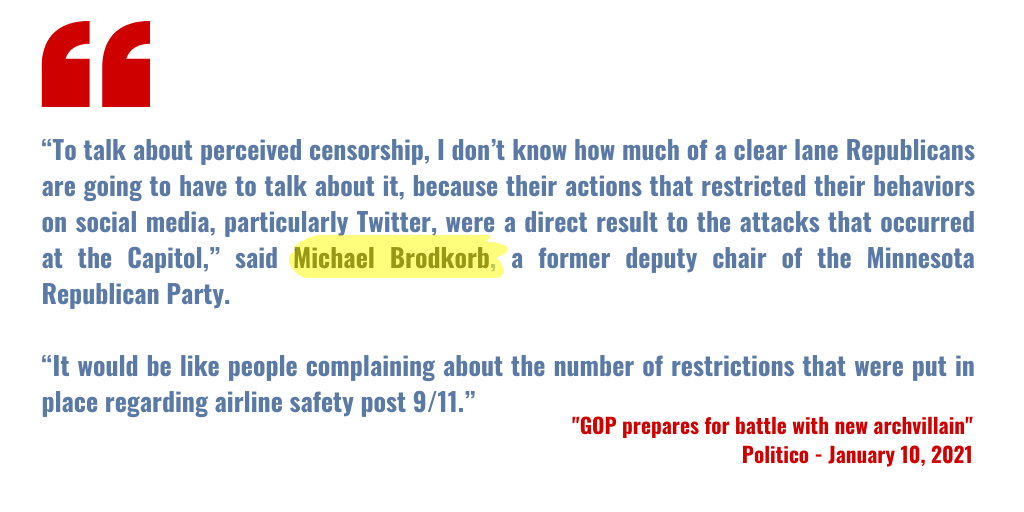 I spoke to Politico and said Big Tech is doing a big favor for Republicans by policing extremist content on social media.

For whatever war the party does have with Big Tech, pinning the subject to Trump’s Twitter ban will not come without risk, largely because the stated reason for the ban — the concern that he would perpetuate more violence — is a reminder of the Trump-inspired, deadly insurrection at the Capitol.

“To talk about perceived censorship, I don’t know how much of a clear lane Republicans are going to have to talk about it, because their actions that restricted their behaviors on social media, particularly Twitter, were a direct result to the attacks that occurred at the Capitol,” said Michael Brodkorb, a former deputy chair of the Minnesota Republican Party. “It would be like people complaining about the number of restrictions that were put in place regarding airline safety post 9/11.”

And while pro-Trump Republicans won’t like it, Brodkorb said, “Ultimately, Big Tech, by policing this content that Republicans have been unwilling and unable to police themselves, they’re actually doing Republicans a favor, because it’s making it more difficult for this extremist type of behavior to continue and to be organized so freely.”